The Top 5 Secrets You Didn’t Know About Beverly Hills

The Top 5 Secrets You Never Knew About Beverly Hills

Treat yourself to a $59 million home in the Hills! C. Zillow

“Beverly Hills…that’s where I want to be!!!”

Need we say anything more? You’ve seen it in the movies, you’ve heard about it in pop songs, and you’ve definitely seen it in many a TMZ paparazzi shot. Take a stroll down the streets of the most famous neighborhood in America, and pull back the gilded curtain shrouding the secrets of America’s A-Listers. (Pro-Tip: Book any of our Beverly Hills tours to get an even MORE up-close and personal exposé of the best neighborhood in LA!)

1. Lifestyles of the Rich and Famous…IRL!

The reports are true— Beverly Hills is truly the most luxurious neighborhood in the world. (Believe it or not, Beverly Hills is actually its own city, with its own police department and legal code.)  Many a celebrity or superstar call it home. As of 2020, the median asking price for a house in Beverly Hills was a casual $3,483,646, according to Zillow. The average household income in Beverly Hills is $190,537. It’s also home to many a celebrity, and boasts two of the wealthiest streets in America- Beverly Park Circle, and Beverly Park Terrace. Beverly Park Circle is consistently ranked America’s most exclusive gated community, with homes averaging around $16.238 million dollars a pop, and one block away, Beverly Park Terrace is close behind, with an average $15.813 million dollar home listing. Denzel Washington and Eddie Murphy call BPT home – for more insider intel as to where the top celebrities live in Los Angeles, book our Beverly Hills Bike Tour to peep the homes of 30+ celebrities!

$50 million? No problem, 40 Beverly Park Circle is all yours. C. Homes of the Rich

Another one of our favorite Beverly Hills filming locations at Bikes and Hikes LA is the iconic Greystone Mansion, the backdrop to many a wealthy protagonist (or villain!) in an incredible number of films, television shows, and commercials. Located in the heart of Beverly Hills, the __ square feet ___ cost mansion has been featured in 72 films, (including “The Social Network,” “Batman and Robin,” “Richie Rich,” “There Will Be Blood,” and more!) 50 television shows (“Gilmore Girls,” “The Young and the Restless,” “Entourage,” etc.,) and countless commercials and music videos! Our LA in a Day and Beverly Hills Bike Tours feature an exclusive walking tour of the grounds of Greystone Mansion – you may not want to leave!

Ugh, AS IF we weren’t going to include a homage to “Clueless” in our Beverly Hills blog! The timeless 1995 classic starring Alicia Silverstone as Beverly Hills “total Betty” Cher Horowitz was filmed at many a Beverly Hills haunt. Speaking of “haunts,” one of the film’s most iconic moments, where Cher realizes she’s in love with her dreamy, adorkable step-brother Josh (played by the ageless Paul Rudd,) was filmed outside of “The Witches House” in Beverly Hills! Known to locals as the Spadena House, this witchy, enchanted looking home is a Beverly Hills staple, and can be haunted by YOU on our Celebrity Homes Bike Tour or Beverly Hills Walking Tour. 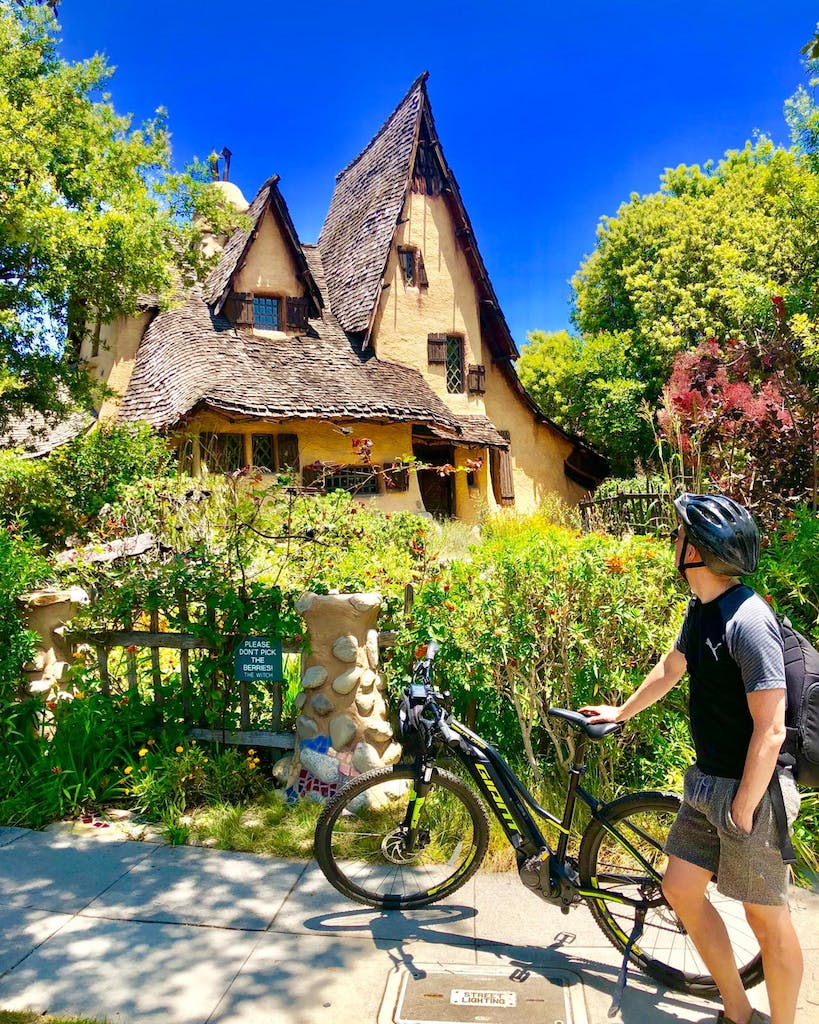 3. Beverly Who? The town was almost named “Morocco.”

Weezer’s 2005 hit “Beverly Hills” would have a slightly different ring to it, were the city to go with one of its original contenders for a name: Morocco! Beverly Hills was nearly named Morocco, when purchased by developer Burton Green in 1900. Green purchased the area for the Amalgamated Oil Company in 1900, and planned to drill for oil in the area. However, the expedition was unsuccessful, and the company was reorganized to become the Rodeo Land and Water Company. Green and his wife then renamed the area to “Beverly Hills,” inspired by the similar rolling hills in Beverly Farms, Massachusetts. Get the ultimate West Coast workout when you book any of our Beverly Hills bike tours – pro-tip: you’ll really feel those aforementioned hills, so upgrade your ride to our elite e-bike tours, and ride like a celeb.

4. It’s the home of the world’s most expensive store…with one sweet ride parked in front.

I hate to be the bearer of bad news, but if you were hoping to swing by Bijan to pick up a thing or two on your LA Staycation, looks like it may be tough to do unless you’re a former US President or royalty. Bijan, located on Rodeo Drive, boasts the title of “The Most Expensive Store in the World,” and is impossible to visit without an appointment. The Bijan space is owned by LVMH (Louis Vuitton Moët Hennessy) for the staggering price of $19, 405 per square foot. For the past 40 years, clients such as Arnold Schwarzzenegger, Barack Obama, and Prince Charles have enjoyed the bespoke suits and accessories available at Bijan. Founded in 1976 by Iranian designer Bijan Pakzad, the store is famous for its limited quantities of premium (and we mean very limited- often times, only one or two iterations of an item exist,) bespoke mens fashion, and collaborations with luxury car designers, such as Bugatti and Rolls Royce. Even if you’re not able to snag a coveted appointment slot at the famous Rodeo Drive shop, you won’t need to look hard to sneak a peek – the store is known for its iconic, vine covered yellow facade, with a matching bright yellow Bugatti parked out front. For another sweet set of wheels, cruise past the famous automobile on one of our premium e-bike tours of Beverly Hills. 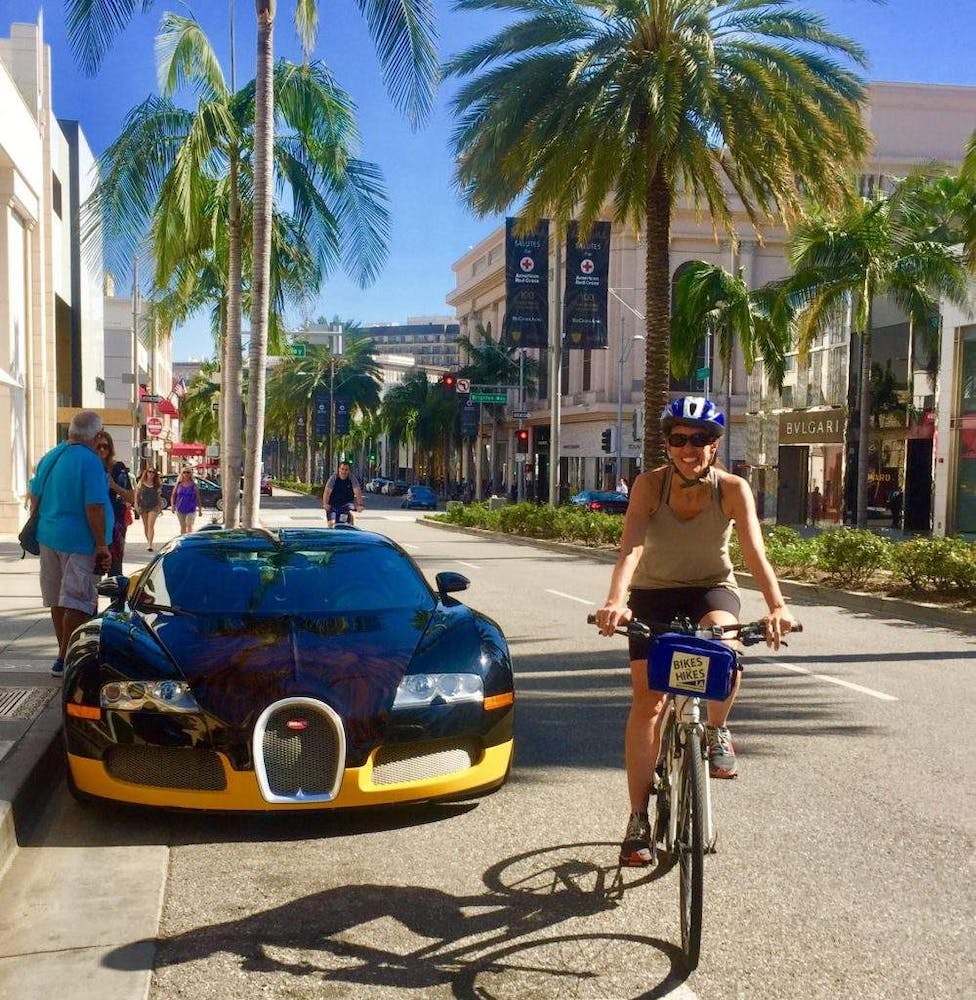 Before the sleek streets of Beverly Hills were filled with Chanel, Bulgari, and Bugattis, they were originally full of…beans. The most famous zipcode in the United States of America used to be the home of one of the largest lima bean fields in the entire state of California. Hollywood is all about reinventing yourself, and Beverly Hills is no exception. If they can have such a legendary glow-up, so can we. These days, you’ll find celebrities, starlets, tourists, and explorers like yourself perusing the swanky shops of Rodeo Drive- and if you see any of our LA bike tours pedaling by, wave hello- and book one of your own!

We look forward to spotting you with the paparazzi the next time you head for the hills! (Beverly Hills, that is.) Book any of our Beverly Hills tours, or other outdoor LA tours and travel like an A-lister. Given the state of the world in 2020, there has literally never been a better time to design an LA Staycation and adventure in your own back yard. The safest way to see LA this fall is to take an outdoor LA tour with Bikes and Hikes LA. We are open 7 days a week, and are currently offering an incredible opportunity for you and your family to make your tour private. Treat yourself to a VIP Bike Tour of Beverly Hills, a Beverly Hills Walking Tour, or our private, full city Los Angeles Bike Tour to experience the best of Los Angeles, up close and personal. While you plan your vacation in the coming months, check out our top recommendations for the best places to explore LA this fall. While you’re at it, check out our insider Hollywood secrets blog, so that you’re already a pro upon arrival. Welcome to LA.

All of our daily tours of Los Angeles and Beverly Hills may be made private, and we offer all of our outdoor tours of LA 365 days per year! Read about how we’re keeping you safe in the COVID-19 pandemic, and check out our updated safety policies here. To book YOUR perfect tour of Beverly Hills, call Bikes and Hikes LA today, and help us help you design the LA Staycation of your dreams.