The Top 5 Secrets You Never Knew About the Hollywood Sign!

Top 5 Secrets You Never Knew About the Hollywood Sign 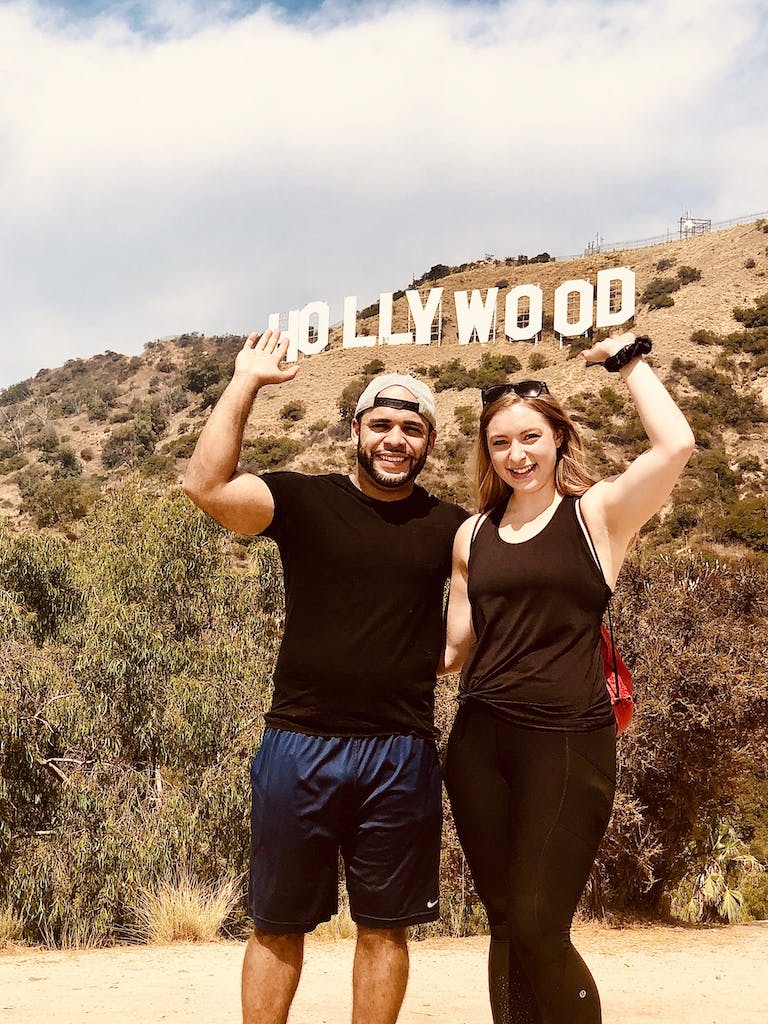 “Jumped in the cab,
Here I am for the first time
Look to my right and I see the Hollywood sign
This is all so crazy
Everybody seems so famous…”

Did you know that the Hollywood Sign, in addition to being one of the top places to visit in Los Angeles and one of the most photographed signs in the world, is also the LARGEST sign of its kind? Like many constituents of Tinseltown, the Hollywood Sign has undergone many a facelift over its nearly 100 year history, and upon its restoration in 1978, the sign and its accouterments racked up some hefty measurements- see below!

Booking your Hollywood Sign Hike with Bikes and Hikes LA and getting literally the best Instagram photo of your life: Priceless.

Extra, Extra, Read All About It! We associate the Hollywood Sign almost instantaneously with lights! camera! action! and moviemaking. Iconic for nearly a century, the Hollywood Sign represents the dreams thousands of actors flock to LA to recognize daily. However, the sign’s inception, almost a hundred years ago, had less to do with filmmaking and more to do with homemaking! The Hollywood Sign was constructed in 1923 as a giant billboard for the “Hollywoodland” Estates, a segregated housing development designed to sit in the splendor of the surrounding Santa Monica Mountains and present day Hollywood Hills. Sponsored in part by Harry Chandler of The Los Angeles Times, the neighborhood was designed by planners Tracey Schoulz and Sydney Woodruff to feature four distinct architectural styles, elicit an “old world” atmospheric feel, and include luxury mansions, pools, and incredible views of the city. To promote the development, Chandler asked designer John Roche to create a giant sign reading “Hollywoodland” in the hills above it. The “land” portion of the sign was removed in 1949, and while the Hollywoodland Estates are no more, the homes in the Hollywood Hills continue to be an elite status symbol and are occupied by many a superstar. The sign was only intended to be up for a year, but due to the boom in the Golden Age of American Cinema, the sign has endured almost a hundred years of icon status. Learn more about the story behind the Hollywood Sign on our private Griffith Park Experience!

City of Stars – The Hollywoodland Sign was originally illuminated by over 4,000 lightbulbs!

If you’ve seen the 2011 romantic comedy “Friends with Benefits” starring Justin Timberlake and Mila Kunis, chances are you’ve been fantasizing about a movie magic moment high above the Hollywood Hills, snuggled up in the “OO”s of the Hollywood Sign with your bOO… (Sorry. Had to.) In the film, Timberlake and Kunis’ characters sneak behind the Hollywood Sign and enjoy jaw-dropping views of LA as they swing their feet off the two O’s in the sign. (Alice Cooper would be so proud!) I won’t lie to you- I definitely had dreams of romantic rendez-vous slash epic adventure on top of the Hollywood Sign someday, and even became a hiking tour guide to be able to see the sign up close and personal on a daily basis. I SWIFTLY learned, however, that it’s quite illegal to climb up and perch on the sign à la FWB, and in fact, those who attempt it can be fined (sometimes up to $1,000!) or even arrested. Eek! Naturally, the filmmakers behind the movie came up with a very Hollywood solution to their dilemma- they faked the location of the Hollywood Sign scene and filmed it somewhere else. LUCKILY for you, if you’re looking to recreate that perfect scene…drumroll please…join us on our incredible Griffith Park Experience and hike the ACTUAL mountain where that scene was filmed! In order to convincingly fake the iconic Hollywood Sign, the film crew replicated the “OO”s at a very similar-looking mountain; our very own Mount Hollywood, the second-highest peak in Griffith Park! You’d never know the difference, and the views are equally (if not more) jaw-dropping– in fact, you could even make a case for LA better views at Mount Hollywood, since it sits directly atop the famous Griffith Observatory- well, just a cool 500 feet higher, that is. So in conclusion, while you can’t live out your “Friends with Benefits” Rom-Com dreams at the REAL Hollywood Sign– but you can hike right next door! Take our daily Griffith Park Experience, and get yourself one step closer to becoming J. Timbz!

5. The Hollywood Sign has been destroyed countless times – onscreen and in real life!

The Hollywood Sign has also been parodied and featured in a number of other films and television shows, including BoJack Horseman, The Simpsons, Shrek, and others. We’re very happy that it’s still standing, so that you can join us on our private Hollywood Sign hike and bask in its glory in Griffith Park.

Now that you’re well equipped with insider Hollywood tips to live like a local, why not take any of our daily LA hike tours and treat yourself to a spectacular, up close and personal rendez-vous with the Hollywood Sign? There’s never been a better time to take an LA Staycation, and in 2020, the safest way to see LA is through any of our daily outdoor LA tours. Bikes and Hikes LA is open 7 days a week, and we are offering you and your family the opportunity to make any of our LA tours private. Treat yourself to a VIP Hollywood Sign Hike, a private Griffith Park experience, or an early morning hike of Runyon Canyon for family to watch the sun rise over LA! Hop on any of our hiking tours or LA bike tours and discover what makes Los Angeles the perfect destination for a 2020 staycation. While you plan your trip, check out our faves for the best places to explore LA this fall. Skip the plane, skip the train, ditch the car, and take a hike- we’ll see you on the trails.

All of our daily tours of Los Angeles may be made private, and we offer all of our outdoor LA tours 365 days per year! Read about how we’re keeping you safe in the COVID-19 pandemic, and check out our updated safety policies here. To book YOUR perfect LA Staycation, call Bikes and Hikes LA today, and help us help you design the LA Staycation of your dreams.

Private Corporate Team Building Hiking Tour to the front and behind the Hollywood Sign – Los Angeles team building at its finest!

Ranked the best in group tours of Los Angeles, this LA tour features jaw-dropping views of the entire Los Angeles basin. This corporate team building Hollywood Hills Hike tour wraps up with an insider tour of the famous Griffith Observatory!

Voted #1 tour in Los Angeles 5 years in a row! Our Griffith Park Experience in the Hollywood Hills introduces you to the hiking paradise of Los Angeles! Tour offered twice daily, at 10 a.m. and at sunset.