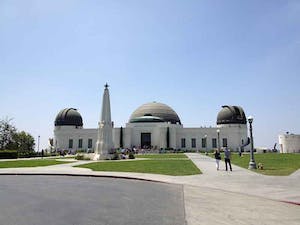 It’s time to report to set! Today, this enthusiastic hiking guide is taking you inside the many filming locations in Griffith Park. Not gonna lie, here at Bikes and Hikes LA, we LOVE Griffith Park, and all of its hiking trails, beautiful views, and of course, that sign. Did you know, that in addition to boasting over 53 miles of trails , a public observatory, and a nearly 5,000 seat ampitheatre, Griffith Park clocks over 300 days of production per YEAR? There’s always something cooking in the park, whether it’s a student film, a music video, or the latest Hollywood Blockbuster. Let’s take a “peak” at some of the best films shot in the mountains of the park.

Whether you hated it or loved it, we can all agree that Damian Chazelle’s 2016 musical masterpiece “La La Land” was one long love letter to some of LA’s best locations. Griffith Park was no exception, serving as the setting for the tuneful tap number “What a Waste of a Lovely Night,” a song and dance between Emma Stone’s Mia and Ryan Gosling’s Sebastian. Shot in Cathy’s Corner, just north of the Hollywood sign, production brought in some benches and a street light to set the scene for the catchy song. Hike up here at sunset, and experience the rich color palatte Chazelle captured over the course of a three-day shoot. While the number itself is only a few minutes long, Chazelle and his team shot the number for 30 minutes at a time over three days, to capture the iconic purple and pink LA sunset.

Rebel Without a Cause – Field Trip and Fight Scene -Griffith Observatory

I apologize for getting this stuck in your head for the next fifteen minutes or so, but did you know that we first met our favorite winged superhero in – Na-na-na-na-na-na-na-na-na-na-na GRIFFITH PARK! The opening sequence to the Adam West Batman TV series in the 1960’s was shot in the Bronson Canyon section of Griffith Park. The naturally ocurring caves in Bronson Canyon allowed Griffith Park to be the first location of the iconic Batcave.  Take a quick hike over the hills to experience the OG Batcave!

I’m sorry to burst your bubble, but the legend of San Diego icon Ron Burgundy (immortalized by Will Ferrell in the 2004 classic “Anchorman”) was actually mostly shot in LA, not San Diego. Of course, Griffith Park makes a cameo in the film. Take a little trip to the LA Zoo, located in the northeast corner of Griffith Park, where you can re-experience laughing till you cry, recalling the scene where Ron and co. battle the bears! Fun fact: if you’re hungry afterwards, visit the Dresden restaurant in Los Feliz, where the infamous Jazz Flute scene was filmed! Stay classy, Griffith Park.

Editor’s Note: Do Not Try This at Home. Or at a Zoo. Or Anywhere. Ever!

Who Framed Roger Rabbit & Back to The Future, Part II – The Observatory Tunnel

Located just north of the Berlin Forest in the park is a fairly innocuous looking tunnel; however, did you know that this tunnel served as the location for both a harried hoverboard chase AND the entrance to ToonTown?! The Observatory Tunnel played a little role in both “Who Framed Roger Rabbit” (1988) and “Back to the Future Part II” (1989). In both movies, the tunnel appears to be quite long, taking several minutes to pass through completely. However, it’s all movie magic. In actuality, the tunnel is about a ten second drive; although on nights where there’s a Greek Theatre Concert, it feels like ten years! Check out the Observatory Tunnel the next time you drive through Griffith Park.

Experience all of these top LA filming locations and more the next time you book your early morning or sunset hike with Bikes and Hikes LA! Who knows…maybe you’ll get discovered along the way.